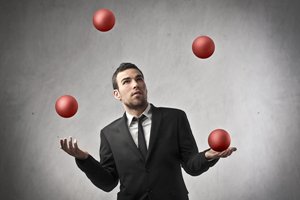 I was a freshman at University of South Florida studying to be a doctor. Taking all the classes that “weeded” out the “wanna be’s” were as difficult as advertised. As I went through my first semester, no problem. At the same time, I became involved in my church youth group and another ministry called Circus Allelujah. High Places was a great youth ministry and I learned so much serving under Pastor Craig’s leadership about helping people grow in Christ. The circus would perform the same acts as the FSU circus because its leaders, Bill and Meg Greenman, graduated from their program. In doing a show, we would perform a circus act (mine were juggling, trapeze, double trap) followed by a performer’s testimony. The show ended with an altar call and so many people would accept Christ. I was in a “crucible of callings.” I love medicine (even today.) But something about ministry began to pull me toward it. Both would impact lives, help them for the better and allow me to bring Christ to a hurting world.

In my second semester, the battle amped up even more. The church and the circus were key parts of my own Christian walk. I was growing so much and I really loved helping others grow in their own faith. School was tough but I was drawn to the goal of being a doctor. It was a virtual tug of war. I prayed so much but couldn’t get the definitive “yes” to either one.

In my first semester of my sophomore year, I continued to pursue all three avenues. One day, in Organic Chemistry, I was sitting in the last row of the lecture hall. The teacher was droning on and I said for the umpteenth time, “God, am I supposed to be a minister or a doctor.” In one of the few times in my life, I know that I heard God almost audibly, “Chris, I want you to be a minister.” That was it. It came that simply and that easily. I was shocked that after all that “work,” it could be that simple.

When I tell that story, people ask, “How do you know that it was God? How do you know you heard right?” Those are fair questions – here’s my answer. I couldn’t be more fulfilled, empowered and happier doing anything else. There are days it is challenging and hard work. People and life are messy and sometimes answers elude me. But even after twenty-five years, I still know I made the right decision. (I do ask my doctor friends about any cool medical break throughs) For me, it’s never been about the job…it is about fulfilling a life calling.